As we approach the Fall, what a wonderful week to have spent focusing on the topic of mushrooms at Grow Green Camp. We used our fungi pocketbooks again this week to safely observe the beautiful array of mushrooms that we have growing right in our backyard at Tucker House! As we do every week on the first day of camp, the group learned a bit about the Tucker history through a guided tour and a trivia quiz during ‘History Corner’. We also played a few games from the 19th century to explore how children from that era would’ve had fun. The Game of Graces is always the one that is a huge hit! We must have been on Mother Nature’s good side because our campers got to swim with the sun high in the sky on Wednesday and didn’t get any rain until pooltime was over that day!

On Monday, we dissected some local cremini and enoki mushrooms. Our mushroom spore prints were also started on Monday with portobello mushrooms. On Tuesday, the camp spent some time studying the spore prints that had been created and also made art with the leftover

mushrooms from the day before!

Fungi often have a common name and a scientific name. On Wednesday, the campers got to learn about the bizarre and beautiful names given to a variety of mushrooms. Like the ‘bleeding tooth’ mushroom or the ‘greasy tough-shank’. On Thursday, we decided on our favourite mushrooms and created IDs for them, then made them out of clay. On Friday, we conducted an experiment called ‘Watch the fungus fizz’ to see what happens when a type of microscopic fungus, yeast, feeds on sugar. Another fun-gi filled week! 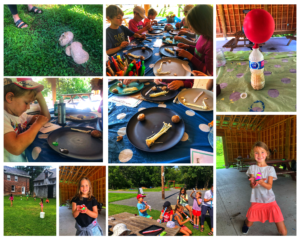 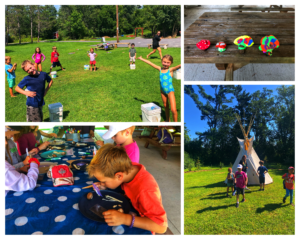