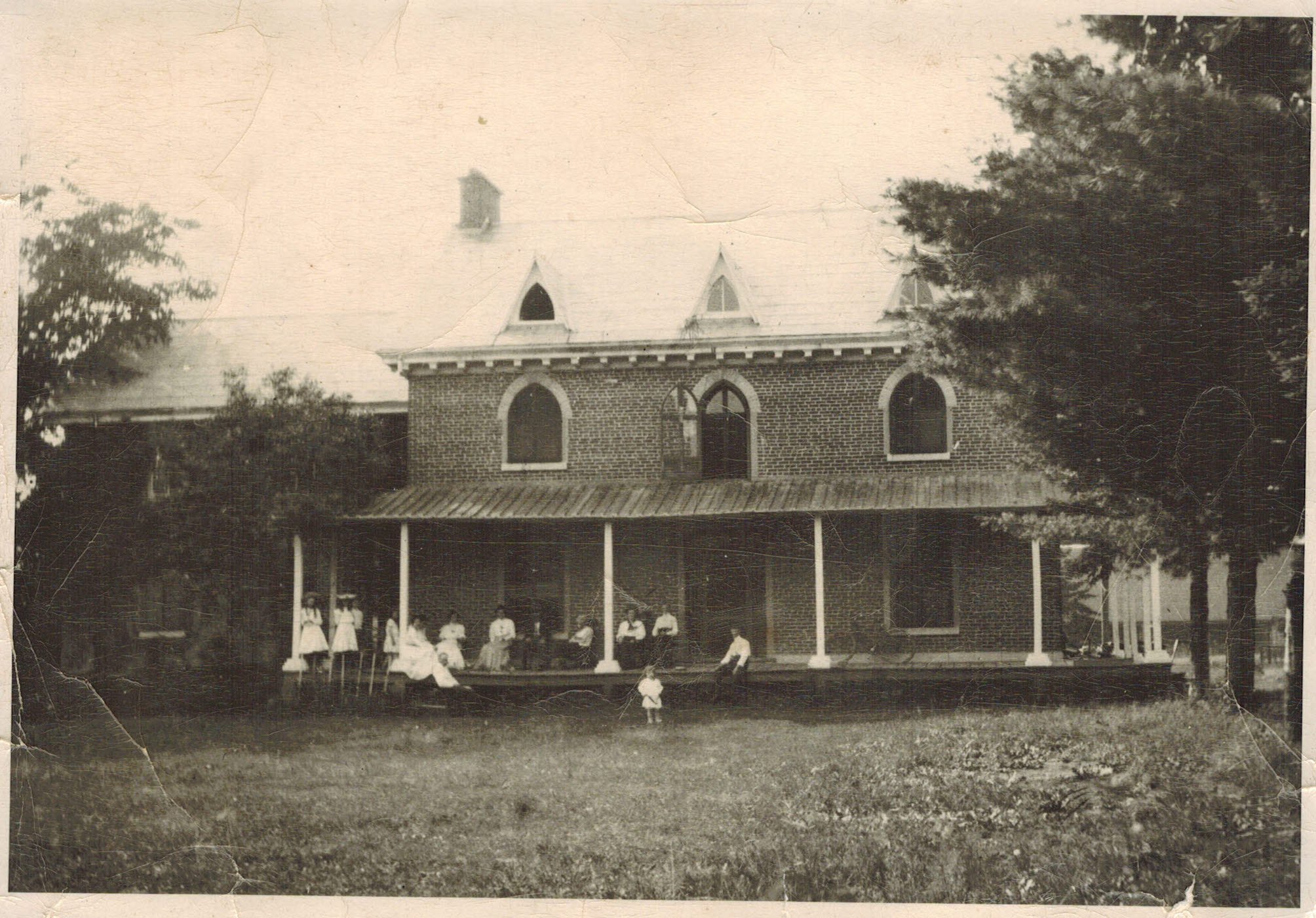 We are most privileged to have Tucker House as our program and retreat centre and are proud to share and preserve the history and heritage of the site and the stories of its founders. The property was passed directly from the Tucker family to their faith community the Baptist Convention of Ontario and Quebec, managed by the local Tucker House Commission, until the incorporation of Tucker House Renewal Centre as an independent charity in 2005. 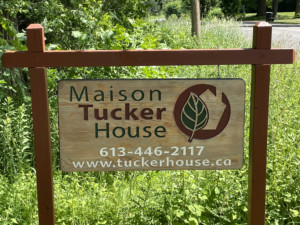 The Tuckers were an early and prosperous family in Clarence Creek, settling in the area in the mid
1800s. They were local industry leaders, having had a successful brickyard, being involved in the lumber boom, and also holding a dairy farm and general store along what was once the main thoroughfare between Ottawa and Montreal.

Mr. Stephen Tucker Senior and Mrs. Tucker lived in the impressive white house across the street from our property, and the lovely brick house to the west held the Tucker General Store and Bank. Tucker House as we know it was built as a wedding gift for their only son, Stephen Tucker Jr. An architect from Montreal designed the Georgian-style home, which was completed around 1870. 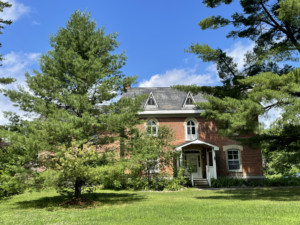 Some of the design details were changed in construction; the original “Widow’s Walk” upper level balcony and some details of the wrap-around porch were revised, possibly due to heavy snow loads. Existing blueprints do not show the kitchen and servant’s quarters, although the exterior brickwork and other findings hint at it being built concurrently rather than as a later addition.

The foundation blocks for the home were quarried on-site from a limestone quarry still visible today. The main area of the house has a full basement (dirt-floor), with the base foundation blocks being 1.5 metres thick. The limestone blocks contain marine fossils showing the natural history of the site. The bricks are three layers thick, providing good thermal mass for the house. We believe the clay was locally sourced. Children are delighted to spy “fossil” footprints in the clay; ask one of our staff to show you the cat paw-prints in the bricks from a cat walking across wet clay bricks laid out to dry in the sun, over 150 years ago! 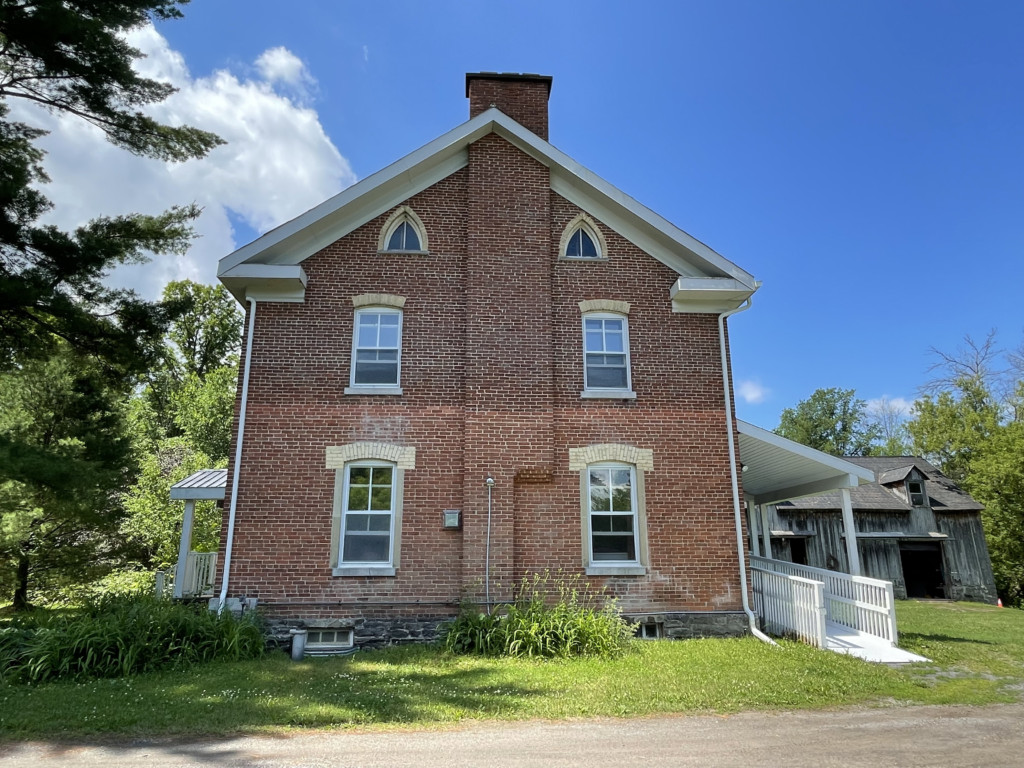 The grand entrance was designed to impress, particularly as at the time of construction, the population of Clarence Creek was only around 200. The floorboards are local white pine, and the beams supporting the house are huge pine logs. Delicate wooden lace adorns the side of the curving staircase. The wooden molding is made from ash wood cut and milled on-site.

The first floor contains the parlour, double dining room, one washroom, and a large kitchen which once included a butler’s pantry.

Notable details include a marbleized fireplace, large white pine floorboards, large double doorways which allowed larger spaces to be divided up to retain heat, and a brick wall between the kitchen and rest of the home. A separate, steep staircase leads from the kitchen to the upper servants’ quarters, which would have allowed the meals to be prepared without disturbing the family. 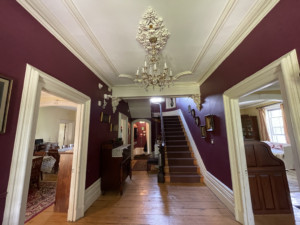 The large staircase has curved decorative niches at the landing and a view of the spacious backyard. The main area of the second floor has four bedrooms; two for children, separate rooms for Mr. and Mrs. Tucker, and a smaller chamber between the master bedrooms with triple doors and a tall window that originally opened onto a balcony. Look carefully at the unpainted woodwork on this floor and you will see that the woodgrain on the doors and trim was actually hand-applied with a comb and brush. There is no wasted space; clever curving of the walls allows for closets in each bedroom.

The house has two washrooms on the second floor; in fact, the Tuckers had early indoor plumbing through a rainwater collection system with a hand pump and gravity feed. One set of servants’ quarters is down the hall on the second floor, and the attic held additional sleeping quarters for servants and also served as a schoolroom for the local children. The attic contained a beautiful schoolroom map of pre-Confederation Canada and children’s school exercise books, currently on loan to a local museum. 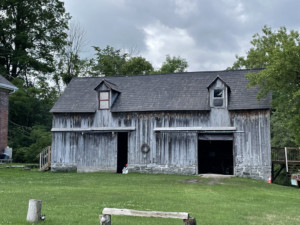 One of the original two barns remains on the property. The extended property also features the  limestone foundations of several other buildings. The residence of our Operations Manager is an even earlier log – and – chinking cabin that once housed a blacksmith. Mr. Tucker did his own surveying of his properties and we have his carefully hand-drawn maps of the area as well as navigational charts for travels to visit relatives in the United States.

The Tucker brothers opened an early cheese factory and kept meticulous records of all transactions for their general store and factory goods. Our documents collection includes the original signed contract between Mr. Tucker and the local dairy farmers – then, as now, a mix of francophone and anglophone families – as well as receipts for equipment purchased in Montreal, quantities of milk purchased and cheese sold, and account statements from the British Bank of North America.

The Tuckers were devout Baptists, as their reading materials, decorative touches, and correspondence showed. After the house had held several generations of Tuckers, the descendants sold the property in the 1970’s to the local Baptist convention for a token fee, as a testament to the faith and legacy of Stephen Tucker. Although Tucker House is now an independent charity, we do maintain some ties to this tradition through an environmental camp open to children of all backgrounds.

For more information, guided tours of the house are available during events or available upon request. You can also visit the Clarence-Rockland Museum to see selected Tucker House artifacts on loan for the Tucker House exhibit.